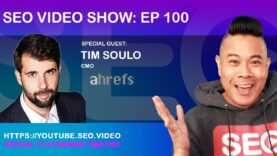 He has led SEO at Moz and educated 1000s with Whiteboard Fridays.

He’s worked with dozens of both startups and Fortune 500 companies.

He is an author at The Moz Blog, Above the Fold, Marketing Pilgrim, Inbound Marketing and SEO (Wiley), How to Rank, and contributor to The Beginners Guide to SEO.

For Cyrus, there are three steps. The first is to have content that answers a user’s question or query they have. But to do this, you must need content and then the links, as Google underplays the need for links. But to reach the top of the page, you need to have user interaction signals which will enable people to find answers to inquiries so that, as much as possible, they won’t need to be looking for more information on another page.

Cyrus first got his film degree when he went to a film school. Then he became a waiter and got a lot of jobs like firefighting and acting, but he spent more of his time as a waiter; he thought of himself as a struggling writer, which led him to build websites and learn how to market them. But with SEO, he didn’t have to deal because the people would be looking for him and just deliver the content they were looking for to help them – it is like the light bulb went off, according to him. Thereon, there were different clients that he worked with.

When he first started working at SEOMoz, he worked in customer service – helping people with software issues. Everything went smoothly, and now he’s doing SEO for the most prominent SEO company. He then meets up with Facebook and Amazon, where they talk about their ranking issues. In a period of being in this paradigm, he realized how far he had reached from waiting tables into what-he-now-called as visible position in an SEO company. Lastly, by doing it, he is also welcome with the idea of teaching it to others.

Cyrus read every article SEO has published and followed every SEO person on Twitter, which he remembered at the time; only 250 of them followed each other. He also thought of the great people in Moz that he ran experiments with, like de-indexed for the sake of a million-dollar experiment. Just as he realized that in an SEO company, they should dive in – teach, learn, and experiment.

22:38 – What was the experiment? What were you testing there when you de-indexed all the pages?

Cyrus has these canonical experiments in his SEO company where they purposely break Google with a canonical tag. He added the term “disavowed,” where he described it as what Google would do.

Cyrus said that in a data set, 5% of links were empty with no anchor, which is a missed opportunity; many were image links. He thought that pages or CMS were not filling in these image links, which is really to do. So, he suggests having a variety of anchor text and filling in those alt attributes on the image links.

Google reward links that people click on. Cyrus added that when you open articles, you must put and keep your internal links in the upper part or the beginning of the article where people will be clicking them.

The top-level navigation’s first link has its anchor text. The second link, located in the homepage’s body, doesn’t seem to count the anchor text from numerous links to a destination from a single URL.

Cyrus highlighted that when you want to do internal linking, you do a site search – where Google will automatically rank the pages for the keyword. But it is not as good as some modern linking solutions. He suggested using good internal linking tools.

Cyrus thought in this segment that the CTR metric shows the proportion of users who saw your advertisement and ultimately clicked on it. Since it shows how appealing your content is to your target audience, CTR is likely one of the most crucial metrics to monitor and analyze. He added that Google uses it.

36:30 – Key factors of getting that perfect title

When optimizing titles, you need to find and combine important keywords in all the data that users are coming to find the site and place it to title tags that work well, as much as by using an automation tool that helps a lot in terms of it.

38:25 – How much attention do you pay to structured data for CTR?

Cyrus thought that copywriting was a secret tool that was hard to optimize. He added the number one rule, which is to test the titles until you are comfortable with them – as it may be a reason that the click-through rate goes down because of the missing keywords added to the title.

Sidesteer is run by a founder of Zyppy, now a separate company. Sidesteer will test for you as it will show you your traffic and the forecasted traffic. The tool helps you determine the change you made for the title tag and if it has made a difference. Here you may find the result to have gone a lot of changes in the title tag, which you will try to make again, but that is just the key to it until traffic comes to the right.

Cyrus highlighted click signals which are about when people do clicking on your content for like maybe one click or long clicks that will make people stay and consume your content than other content, and closing it directly means that they are satisfied with your content, and that makes it more of a factor to rank it to the top of the page.

The last click for Cyrus will give users the answers to their queries, and it is much more the basis to see the relationship between metrics and ranking of how much traffic you will be receiving. The last click should be your target to satisfy users with what they’re looking for. Else, it will not be ranked.

49:09 – If someone wants to get into the SEO game and become an SEO professional. What would be like best advice you’d give to them?

Cyrus said that you should run your site and publish regularly. Then you also need to run experiments and case studies and write about it, then make it something unique that the rest of the SEO industry has not seen before – as the industry is hungry for information. So, that is why he suggested running your site and then publishing and teaching others – it is a win-win situation to get yourself an incredible career just by doing those two things.

Google recently updated the Article structured data documentation to reflect that Article markup is open to all types of pages.

Let’s check out some best practices by Google on implementing structured data.

We love structured data here on the SEO Video Show.

We haven’t spoken about toxic links much here on the show.

Personally, I will disavow them. What are your strategies for combating toxic links?

Let me know in the live that or comment below.

Can SEO make you rich?

Another past guest on the show, Nathan Gotch, shares his thoughts

Being rich is subjective, but I’ll tell you from experience that being an in-house enterprise SEO can be pretty lucrative.

Our guest today was on a show earlier this week, and he shared Internal Linking Strategies for SEO Success.